Silversun Pickups Rekindle My Passion For Rock Music at Terminal 5 in NYC! 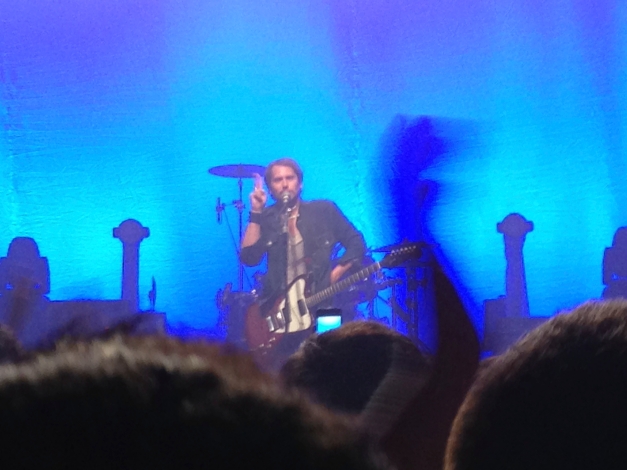 Although everyone knows me as a progressive house DJ, most people don’t know that rock music has always been my biggest influence. I am a product of the 90’s grunge revolution, I worshipped, Smashing Pumpkins, Stone Temple Pilots, Hole, Pearl Jam, Nine Inch Nails, The Smiths, and Tool. In fact, the 90’s rock sound was probably the biggest influence on my life, even more then dare I say, Sasha or Paul Van Dyk or any dance music. With that in mind, I must be admit that I never been to Terminal 5 prior to the Silversun Pickups concert. Well, actually thats not true. During my promoter days I threw numerous events at this location when the venue was a dance club guido-fest haven named “Exit”, during the height of NYC ‘superclub’ era. Walking in flooded memories -admittedly blurry memories of ravers, guidos and club kids all worshipping DJ’s, in an enormous packed megaclub, consistently pounding with techno beats until the late afternoon- yes folks late afternoon, this was completely acceptable hours back then. So with that in mind, it was strange to return to see the venue transformed into a rock concert venue. But can a rock band drive a crowd into a frenzy like DJ’s used to when Terminal 5, was Exit? After Silversun Pickups’s stellar performance, I can wholeheartedly can say, the answer is yes!

I walked in a little late, but just in time to catch opening band “Atlas Genius” play their radio hit “Trojans”. Immediately, my shock over how this venue can possibly become a rock venue, was laid to rest. Terminal 5, is perfect for a concert, no matter where you stand you can see and hear the band loud and clear. Walking in, I heard the crowd cheer to the catchy baseline in Atlas Genius’s radio hit, “Trojans”. Atlas Genius, has a lot of potential to lead in what I think is the new sound of alternative. Funky, dancey baselines framed with guitar riffs and melodic grooves, with plenty of 80’s new wave influences, thrown in. “Trojans” reminds me of Phoenix’s 2009 hit, “Liztomania”, in fact, both tracks mix perfectly together- what can I say I am a DJ. Perhaps, Phoenix never blew up to their full potential because they were just a little ahead of their times. Pop music has deteriorated into cookie cutter dance music, and the time is ripe for rock to make a comeback, perhaps “Atlas Genius,” provides a template for the future of rock. I can’t say much about the next opening band, the properly named “Cloud Nothings”. They must be on a Cloud if they think, they are giving us anything new. They tried so hard to emulate a punk/grunge band from the 90’s, it literally was painful to watch.

I know a counterfeit Nirvana band when I see it. Oh, the disheveled greasy hair covering the eyes, the required flannel shirt, the screaming angst. Me and my boyfriend looked at each other and thought “Oh god, are they serious?” The crowd was unimpressed except, for the lonely guy towards the front of the stage losing his mind to them, perhaps he was friends with the band. The music was the standard loud, soft, loud, grungy 90’s sound that Nirvana pioneered, however this band forgot that Nirvana actually had melodies and hooks. There was more to Nirvana then clothes and hair! For the life of me I can’t even remember one single song, enough said.

As soon as the strumming from Silversun Pickups started, we immediately forgave them for such a poor choice in opening act. “Skin Graph” made for the perfect opening track. Literally I felt goosebumps when Aubert sang “your skin is alive as it moves me”. Yes people, they sound and almost look like the “Smashing Pumpkins”, however there is a difference between imitation and influence, and although although I must say, the leader Brian Aubert, kind of looks like Billy Corgan– (circa 1992, with hair) they have their own unique sound and style. And what a performance! I can only say it was flawless, sounded better then any of the studio recordings. Aubert’s personality shined through his personal chats with the audience, in between songs. He said he was humbled to perform at NYC’s Terminal 5, a venue that featured legendary Morrissey, just days ago. Did he really mention Morissey? Wow is it 1990?

Almost all of the songs from the new album “Neck Of Woods” were performed along, with a majority of the songs from what I think its the perfect rock album, “Swoon”. And wow, Sarah Negahdari (who Aubert mentioned was replacing Nikky as guitarist for this tour, due to her pregnancy) was so adorable, she looked like a cartoon rock star, the perfect blend of sexy and gritty. She smile and swayed reminiscent of the hippy chick from the muppets. Aubert’s high pitch vocals and bizarre dance moves coalesces perfectly to the gritty melodies of that Silversun Pickups sound. I can see a glimmer in Aubert’s eyes, he seemed elated to perform to New Yorkers at Terminal 5, and in turn so was the crowd, a perfect melting pot of NYC, rockers, fags, hipsters, everyone was well represented.

After a pleading demand for an encore performance from the crowd, Silversun Pickups surprised the audience with five more songs! They even performed their first hit “Lazy Eye”, which was the biggest crowd pleaser of the night. I am proud to give Silversun Pickups a perfect 5 star performance. Thank you, Silversun Pickups, you are my favorite modern tock band, thanks for bringing me back to rock music!